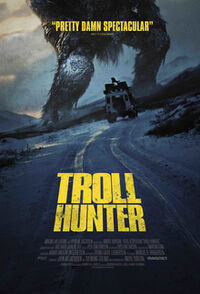 The Dovregubben, also known as Mountain Kings, are minor antagonists in the 2010 Norwegian horror film Trollhunter.

The Dovregubben are the only trolls seen in the film that appear to be a social species, living in a large pack in a Norwegian cave.

The Dovregubben are medium-sized trolls with brown fur, abnormally large and bulbous noses, and very few real distinguishing features. They are the smallest trolls seen in the film.

The Dovregubben possess the following powers and abilities:

The Dovregubben chase the protagonists out of their cave and succeed in killing one of them. The trolls themselves survive the events of the film and are last seen returning to their cave.

Add a photo to this gallery
Retrieved from "https://movie-monster.fandom.com/wiki/Dovregubben?oldid=1207"
Community content is available under CC-BY-SA unless otherwise noted.