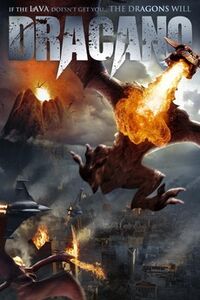 The Dracano Dragons are the main antagonists of the 2013 American horror film Dracano.

When explosive scientific instruments are detonated inside an active volcano, the eruption releases a swarm of draconic creatures that could spell the end of humanity should other volcanoes around the world do the same.

Dracano Dragons are large grayish-brown wyverns with wingspans of approximately 20 feet and long tails ending in a shape like an ace of spades.

The Dracano Dragons possess the following powers and abilities:

The last of the dragons is killed by fighter jets during the small window of opportunity in which it is vulnerable after emerging from its magma cocoon.

Add a photo to this gallery
Retrieved from "https://movie-monster.fandom.com/wiki/Dracano_Dragons?oldid=2077"
Community content is available under CC-BY-SA unless otherwise noted.