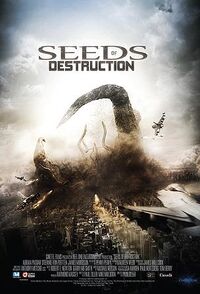 The Eden Plant is the main antagonist of the 2011 American horror film Seeds of Destruction.

After the Biblical figure Adam steals several seeds from the Garden of Eden and has them put in his burial urn when he dies, they are found in the present day and planted, creating a gigantic root system of biblical proportions.

The Eden Plant consists of a series of enormous dark-colored roots.

The Eden Plant possesses the following powers and abilities:

The Eden Plant is destroyed after its central tap root is blown up.

Add a photo to this gallery
Retrieved from "https://movie-monster.fandom.com/wiki/Eden_Plant?oldid=1131"
Community content is available under CC-BY-SA unless otherwise noted.