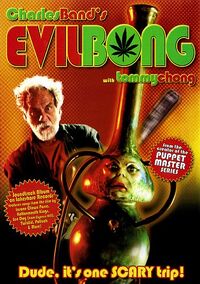 Eebee is the main antagonist of the 2006 American comedy-horror film Evil Bong and its sequels.

A group of stoner college students comes into possession of a demonically possessed bong that transports those who smoke from it to a supernatural strip club filled with strange creatures.

Eebee is a bluish-gray bong with the face of an ugly woman on its side. This face has judgemental blue eyes, an upturned nose, gaunt cheek"bones", red lips, and a blush on its cheeks.

Jimbo intentionally gets sucked into the bong's pocket dimension and uses a time bomb strapped to his chest to blow it up from the inside, killing himself in the process. However, she is revived in the sequels.

Add a photo to this gallery
Retrieved from "https://movie-monster.fandom.com/wiki/Eebee?oldid=2302"
Community content is available under CC-BY-SA unless otherwise noted.