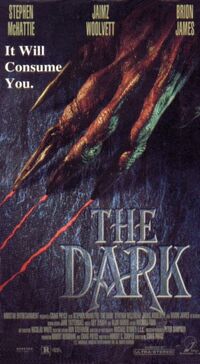 Elefaria is the main antagonist of the 1993 Canadian horror film The Dark.

This ancient creature lives in a local graveyard, where it maneuvers about through a vast network of underground tunnels and consumes dead bodies straight from their coffins.

Elefaria is an enormous, bipedal, rat-like creature with brown fur and large canines replacing its rodent incisors. It also has numerous porcupine-like quills emerging from its back.

Elefaria is killed after being shot multiple times in the stomach.