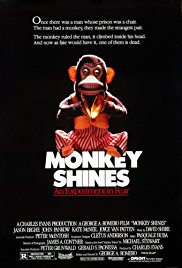 Ella is the main antagonist of the 1988 American horror film Monkey Shines.

When athlete Allan Mann is rendered quadriplegic after a car accident, his friend Geoffrey Fisher gives him a monkey named Ella to keep him company, a monkey who, unbeknownst to Allan, has been subjected to experiments that involve human brain tissue being injected into primates.

Ella is a brown tufted capuchin (Sapajus apella) with lighter fur on her face.

Ella is killed after she is thrown into the open slot of a tape deck.

Add a photo to this gallery
Retrieved from "https://movie-monster.fandom.com/wiki/Ella?oldid=1218"
Community content is available under CC-BY-SA unless otherwise noted.