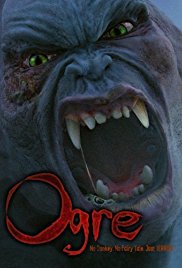 The Ellensford Ogre is the main antagonist of the 2008 American horror film Ogre.

The Ellensford Ogre is a massive creature that terrorized the town of Ellensford, a small village trapped in the 19th century for many decades, prompting the townspeople to sacrifice people to it.

The Ellensford Ogre is a hulking hunchbacked figure with bumpy gray skin, long muscular arms, short legs, and a human-like face with an underbite. It has sauropod-like feet and a brown loincloth.

The Ellensford Ogre possesses the following powers and abilities:

The Ogre is defeated after a blinding beam of light causes it to move outside the boundaries of the town, destroying it.

Add a photo to this gallery
Retrieved from "https://movie-monster.fandom.com/wiki/Ellensford_Ogre?oldid=1132"
Community content is available under CC-BY-SA unless otherwise noted.