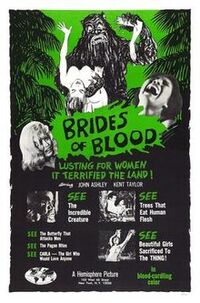 The Esteban Monster, formerly known as Esteban Powers, is the main antagonist of the 1968 Filipino horror film Brides of Blood.

Radiation tests on a tropical island have resulted in the wealthy Esteban Powers transforming into a murderous creature whenever he has a migraine.

The Esteban Monster possesses the following powers and abilities:

Esteban, in his monster form, is cornered in a hut and set on fire. He then stumbles out of the hut, having transformed back into a human, and falls down dead.

Add a photo to this gallery
Retrieved from "https://movie-monster.fandom.com/wiki/Esteban_Monster?oldid=2318"
Community content is available under CC-BY-SA unless otherwise noted.