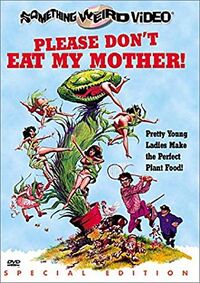 Eve is the main antagonist of the 1973 American comedy-horror sexploitation film Please Don't Eat My Mother.

Eve is a tall phallic plant with a green and white stem. Her head is nearly identical to that of a typical venus flytrap except the cilia are replaced with actual yellowish teeth. She has numerous tentacle-like vines and two rows of cilia on top of her head.

Eve is provided with a male plant to mate with, producing numerous offspring.

Add a photo to this gallery
Retrieved from "https://movie-monster.fandom.com/wiki/Eve?oldid=2321"
Community content is available under CC-BY-SA unless otherwise noted.