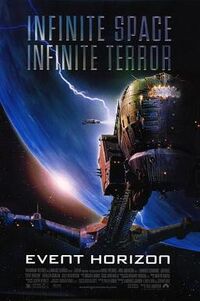 In the year 2040, the spaceship Event Horizon disappeared after an experiment with an untested dimensional warp drive. In the year 2047, it reappeared and sent out a distress signal; as it turns out, the dimension it passed through was akin to Hell and left the ship possessed by a demonic force.

The Event Horizon is an oddly designed ship with a large, vertically tall front half. The initial ship tapers off into a thin "tail" that ends in another large component, from which two engines emerge.

The Event Horizon possesses the following powers and abilities:

The ship's gravity drive activates, opening a wormhole that pulls the ship's back half into the "Hell" dimension. The ship's front half remains in our dimension and is implied to still be sentient.

Add a photo to this gallery
Retrieved from "https://movie-monster.fandom.com/wiki/Event_Horizon?oldid=1195"
Community content is available under CC-BY-SA unless otherwise noted.