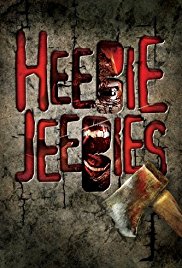 Fùchóu is the main antagonist of the 2013 American horror film Heebie Jeebies.

The reopening of a local mine has caused a creature made up of the bodies of five miners who died in it to emerge and kill anyone who would dare to take its gold.

Fùchóu is a tall skeletal figure covered in stretched black skin that exposes the bones in several spots. Its main head has black eyes with no pupils and a gaping red mouth. There is a second head nearly identical to this embedded on the left side of its chest. Its torso is dominated mostly by an enormous mouth filled with needle-like teeth. Three more heads are located on its back, on its hip, and on its left foot. There is also an arm emerging from its hips.

The creature is killed after it is set on fire and blown up.

Add a photo to this gallery
Retrieved from "https://movie-monster.fandom.com/wiki/F%C3%B9ch%C3%B3u?oldid=1011"
Community content is available under CC-BY-SA unless otherwise noted.