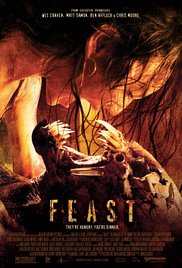 The Feasters are the main antagonists of the 2005 American action-horror film Feast.

A frantic man bursts into a Nevada bar to warn the patrons inside about carnivorous monsters closing in, but his abrupt death gets the group on edge and prompts them to fight for their lives.

The Feasters are tall muscular humanoids with brownish-orange skin. Their heads are their most defining features due to their enormous mouths filled with yellow, dagger-like teeth and small, deep-set eyes. They also have a crest of thin quills on top of their heads.

The Feasters possess the following powers and abilities:

The monsters are killed during a brutal battle between them and the bar patrons. However, one is shown to survive the events of the film.

Add a photo to this gallery
Retrieved from "https://movie-monster.fandom.com/wiki/Feasters?oldid=1974"
Community content is available under CC-BY-SA unless otherwise noted.