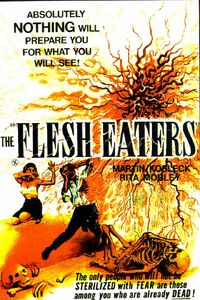 A washed-up actress and her assistant are forced by a storm to land on a small island, which is inhabited by a United States government agent-turned-Nazi scientist who has bred a species of microbes capable of devouring a human within seconds.

The Flesh Eaters are tiny microscopic amoeba-like creatures that can combine their biomass to form larger masses.

The Flesh Eaters possess the following powers and abilities:

After it is discovered that the microbes eat only flesh and leave behind blood, Murdoch injects a sample of hemoglobin into the now giant conglomeration of microbes, killing it.

Add a photo to this gallery
Retrieved from "https://movie-monster.fandom.com/wiki/Flesh_Eaters?oldid=1414"
Community content is available under CC-BY-SA unless otherwise noted.