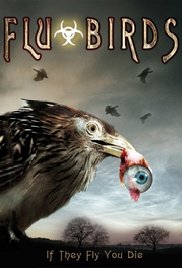 The Flu Birds are the main antagonists of the 2008 American horror film Flu Bird Horror.

Infected by a mysterious virus, these birds have mutated into voracious humanoid beasts with a taste for live humans.

Flu Birds are semi-humanoid creatures with wrinkled black skin and emaciated bodies. Rather than feathers, the Flu Birds have veiny, leathery wings like a bat. Their heads have small eyes and vulture-like beaks.

The Flu Birds possess the following powers and abilities:

The Flu Birds are blown up after being trapped in a gas-filled military bunker that the protagonists ignite.

Add a photo to this gallery
Retrieved from "https://movie-monster.fandom.com/wiki/Flu_Birds?oldid=864"
Community content is available under CC-BY-SA unless otherwise noted.