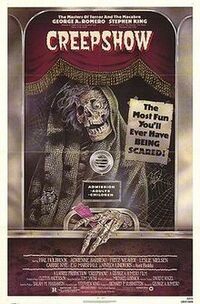 Fluffy the Crate Beast is a major antagonist in the 1982 American comedy-horror film Creepshow.

When a college custodian uncovers a mysterious crate brought back by an archaeological expedition to the Arctic, he and a professor decide to open it, unleashing an ape-like creature with a taste for human flesh.

Fluffy the Crate Beast possesses the following powers and abilities:

Fluffy is supposedly killed when his crate is dropped in a lake, but it is revealed that he escaped and is alive.

Add a photo to this gallery
Retrieved from "https://movie-monster.fandom.com/wiki/Fluffy_the_Crate_Beast?oldid=1289"
Community content is available under CC-BY-SA unless otherwise noted.