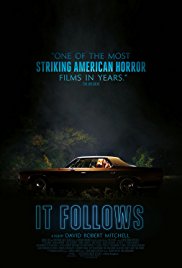 The Follower is the main antagonist of the 2014 American horror film It Follows.

The Follower is a demonic monster that slowly walks towards its target and can be passed on to someone else through sexual intercourse. When it kills a victim, it will then work its way back down the chain of past victims.

The Follower's true form is unknown, but it can take the form of any person.

The Follower possesses the following powers and abilities:

The Follower is seemingly killed after it is shot multiple times and drowned in a swimming pool. However, the end of the film shows that it survived.

Add a photo to this gallery
Retrieved from "https://movie-monster.fandom.com/wiki/Follower?oldid=2325"
Community content is available under CC-BY-SA unless otherwise noted.