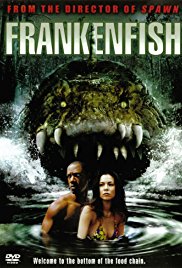 The Frankenfish are the main antagonists of the 2004 American horror film Frankenfish.

The Frankenfish are large predatory fish with humped backs, dark green backs, and light underbellies. Their skin is wrinkled and they have large dorsal fins on their heads.

The Frankenfish possess the following powers and abilities:

One of the fish is killed by a shotgun blast to the head and another is killed after it collides with a boat propeller. Numerous baby fish are seen at the end of the film.

Add a photo to this gallery
Retrieved from "https://movie-monster.fandom.com/wiki/Frankenfish?oldid=870"
Community content is available under CC-BY-SA unless otherwise noted.