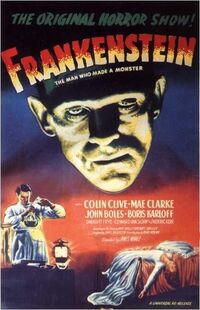 Frankenstein's Monster is the main antagonist or anti-hero of the 1931 American horror film Frankenstein and its sequels.

This monster was constructed from body parts by the mad scientist Dr. Victor Frankenstein and brought to life via an electrical storm. However, due to a mistake made by Frankenstein's assistant Fritz, the monster is rendered a mute beast that quickly escapes.

Frankenstein's Monster is a tall mountain of a man with grayish-green skin and stitches on certain areas of his body, signifying where he has been sewn together. His head is flat on top, with short black hair and large bolts on his head. He wears a tattered brown coat and heavy boots.

The creature is killed after it is trapped inside of a windmill that is then set on fire.