Gabara is the main antagonist of the 1969 Japanese kaiju film All Monsters Attack.

When a bullied boy named Ichiro falls asleep, he dreams that he is on Monster Island, where he witnesses Godzilla's son Minilla being bullied by an oni-like creature.

Gabara is an aquamarine humanoid creature with bumpy skin and a shock of orange hair on its head. Its underbelly is light gray and is heavily armored. Its face is distinctly feline in formation, with flaring nostrils and a split lit. Gabara has two large ears and a single horn on its head.

Gabara survives the events of the film, simply retreating after Godzilla beats it up sufficiently. 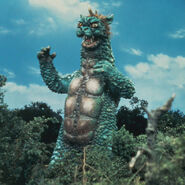