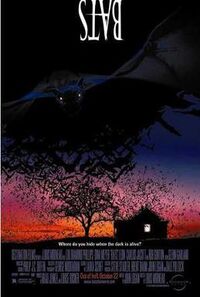 The Gallup Bats are the main antagonists of the 1999 American horror film Bats.

A flock of bats has been genetically engineered to be hyper-intelligent and omnivorous to prevent their extinction, but they begin to terrorize the small Texas town of Gallup.

The Gallup Bats possess the following powers and abilities:

The protagonists turn on a nearby cooling unit to lower the mineshaft's temperature and then use explosives to collapse the entrance, trapping the bats inside and freezing them. One bat is shown to have survived, but it is quickly run over by a car.

Add a photo to this gallery
Retrieved from "https://movie-monster.fandom.com/wiki/Gallup_Bats?oldid=2511"
Community content is available under CC-BY-SA unless otherwise noted.