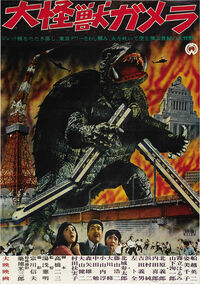 Powerful jaws
Flight
Gamera is the main antagonist of the 1965 Japanese kaiju film Gamera, The Giant Monster, and the main protagonist of its sequels.

Due to nuclear tests performed in the Arctic, the giant turtle Gamera is released from his prehistoric icy prison and goes on a horrible rampage throughout Japan.

Gamera resembles an enormous upright freshwater turtle with a hunched back, large human-like eyes, and large tusks emerging from the corners of his mouth.

Gamera is ultimately trapped inside a rocket and launched into space. However, he returns in the sequels. 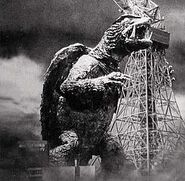