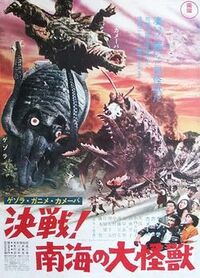 Ganimes is a major antagonist in the 1970 Japanese kaiju film Space Amoeba.

Ganimes is an enormous gray crustacean covered in sparse patches of dark gray hair. Its exoskeleton is covered in numerous triangular spikes, and its large claws are serrated. Ganimes' eyes sit at the end of short stalks, which sit beneath two long thin antennae.

Ganimes throws Kamoebas into a volcano but is pulled in with him, killing them both. 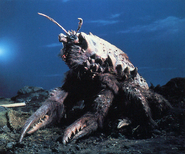 Add a photo to this gallery
Retrieved from "https://movie-monster.fandom.com/wiki/Ganimes?oldid=2157"
Community content is available under CC-BY-SA unless otherwise noted.