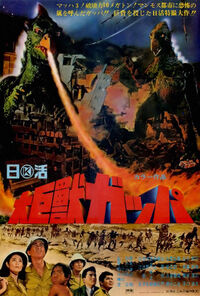 The Gappas are the main antagonists in the 1967 Japanese kaiju film Gappa: The Triphibian Monster.

When a Japanese expedition to Obelisk Island discovers and brings back a baby creature called a Gappa, its parents awaken from their slumber and go on a rampage to retrieve their son.

The Gappas are green theropod-like creatures with brown bird-like beaks, two snake-like fangs, and brown crests on their heads. Attached to their backs are large bat-like wings.

The Gappas possess the following powers and abilities:

Once the two parents recover their baby Gappa, they peacefully return to Obelisk Island. 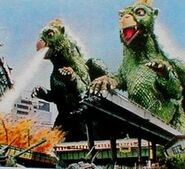 Add a photo to this gallery
Retrieved from "https://movie-monster.fandom.com/wiki/Gappas?oldid=2194"
Community content is available under CC-BY-SA unless otherwise noted.