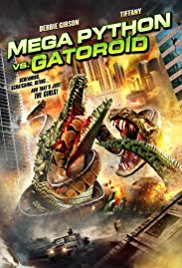 The Gatoroids are some of the main antagonists of the 2011 American horror film Mega Python vs. Gatoroid.

To combat the rising Mega Python epidemic, several townspeople lace chickens with steroids and feed them to several alligators, causing them to grow to enormous sizes.

The Gatoroids are gigantic reptiles identical to American alligators.

The Gatoroids possess the following powers and abilities:

The Gatoroids are killed after a large portion of the Everglades is blown up by an attack helicopter.

Add a photo to this gallery
Retrieved from "https://movie-monster.fandom.com/wiki/Gatoroids?oldid=1018"
Community content is available under CC-BY-SA unless otherwise noted.