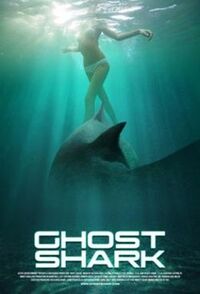 The Ghost Shark is the main antagonist of the 2013 American horror film Ghost Shark.

After being tortured and killed for eating a fisherman's catch, a shark floats into an underwater magical cave and is resurrected as a ghost that can manifest and kill through even the smallest amount of water.

The Ghost Shark is nearly identical to a typical great white shark, the only difference being that it is glowing white and translucent.

The Ghost Shark possesses the following powers and abilities:

The shark is dealt with by the protagonists blowing up the magical cave, causing the shark to pass on.

Add a photo to this gallery
Retrieved from "https://movie-monster.fandom.com/wiki/Ghost_Shark?oldid=685"
Community content is available under CC-BY-SA unless otherwise noted.