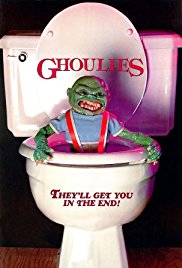 The Ghoulies are the main antagonists of the 1984 American comedy-horror film Ghoulies and its sequels.

The Ghoulies are demonic imp-like creatures that can only be brought into our world via Satanic rituals; when released, they have a penchant for causing mayhem and pulling pranks.

The Ghoulies possess the following powers and abilities:

The Ghoulies are seemingly destroyed after they are trapped in a large mansion that is crumbling apart. However, the end of the film shows that some of them escaped in Jonathan's car.

Add a photo to this gallery
Retrieved from "https://movie-monster.fandom.com/wiki/Ghoulies?oldid=867"
Community content is available under CC-BY-SA unless otherwise noted.