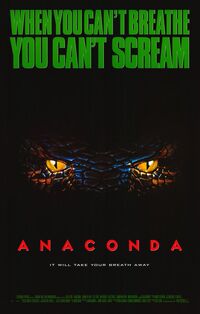 The Giant Anaconda is the main antagonist of the 1997 American-Portuguese horror film Anaconda.

While shooting a documentary about the Shirishama of the Amazon Rainforest, a film crew is stalked and picked off by this giant snake.

The Giant Anaconda is a gigantic brownish-green constrictor snake with orange highlights near its orange-yellow eyes and orange spots running down its sides.

The Giant Anaconda possesses the following powers and abilities:

The first Giant Anaconda is killed when it is shot in the head by Terri Flores while the second one is set on fire and then killed by Danny Rich with a splitting maul/axe.

Add a photo to this gallery
Retrieved from "https://movie-monster.fandom.com/wiki/Giant_Anaconda?oldid=3202"
Community content is available under CC-BY-SA unless otherwise noted.