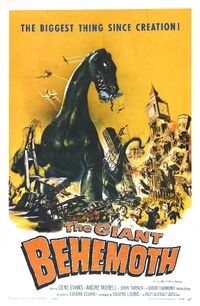 The dumping of nuclear waste in the world's oceans accidentally awakens and mutates a sleeping aquatic dinosaur, which proceeds to make its way inland.

The Giant Behemoth is an enormous dark green sauropod.

The Giant Behemoth possesses the following powers and abilities:

A torpedo filled with radium is fired into the creature's mouth, accelerating the radiation poisoning that is already killing it.

Add a photo to this gallery
Retrieved from "https://movie-monster.fandom.com/wiki/Giant_Behemoth?oldid=2844"
Community content is available under CC-BY-SA unless otherwise noted.