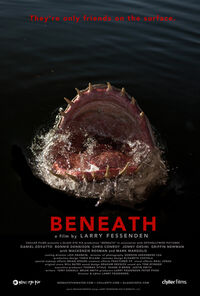 The Giant Catfish is the main antagonist of the 2013 American horror film Beneath.

When six high school seniors about to graduate go on a short vacation to a secluded lake, they are attacked by a bloodthirsty, man-eating catfish of enormous size.

The Giant Catfish is a gigantic catfish measuring over ten feet in length. It has dark muddy brown skin with cream stripes on its back and a large fin that stretches down its back. It has numerous dagger-like teeth and bulbous yellow eyes with oval pupils.

The Giant Catfish possesses the following powers and abilities:

The fish succeeds in killing all of the main protagonists.

Add a photo to this gallery
Retrieved from "https://movie-monster.fandom.com/wiki/Giant_Catfish?oldid=1118"
Community content is available under CC-BY-SA unless otherwise noted.