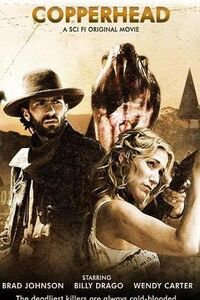 The Giant Copperhead is the main antagonist of the 2008 American horror-western film Copperhead.

When a swarm of venomous snakes begins to make its way towards a wild west New Mexico town, the townspeople must band together to fend it off, as well as its matriarch.

The Giant Copperhead possesses the following powers and abilities:

The Giant Copperhead is killed after it is shot in the mouth by Wild Bill.

Add a photo to this gallery
Retrieved from "https://movie-monster.fandom.com/wiki/Giant_Copperhead?oldid=1684"
Community content is available under CC-BY-SA unless otherwise noted.