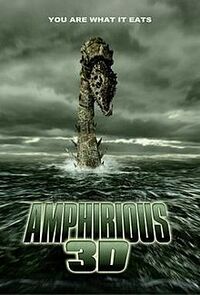 The Giant Eurypterid is the main antagonist of the 2010 Indonesian-Dutch horror film Amphibious.

A chartered boat hired to help a marine biologist collect prehistoric fossils near an off-shore Indonesian fishing rig is attacked by a gigantic sea scorpion.

The Giant Eurypterid is a large gray scorpion-like monster with a spiny exoskeleton, large claws, four small black eyes, and a scorpion-like tail unlike that of real eurypterids.

The Giant Eurypterid possesses the following powers and abilities:

The creature is killed after Tamal, the girl who summoned it, stabs it in the brain.

Add a photo to this gallery
Retrieved from "https://movie-monster.fandom.com/wiki/Giant_Eurypterid?oldid=1911"
Community content is available under CC-BY-SA unless otherwise noted.