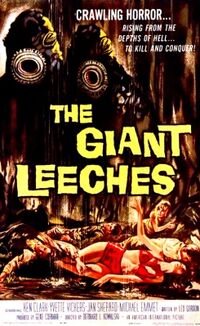 The Giant Leeches are black in color and stretching nearly seven feet in length. Their "heads" are equipped with enormous suction cup-like mouths and they appear to have numerous suckers on their undersides.

The Giant Leeches possesses the following powers and abilities:

The Giant Leeches are defeated when the entrance to their underwater cave is blown up with dynamite.

Add a photo to this gallery
Retrieved from "https://movie-monster.fandom.com/wiki/Giant_Leeches?oldid=774"
Community content is available under CC-BY-SA unless otherwise noted.