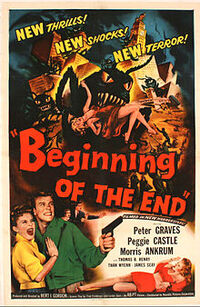 The Giant Locusts are the main antagonists of the 1957 American horror film Beginning of the End.

When an agricultural scientist successfully grows a strain of gigantic crops using radiation, these giant plants are quickly eaten by swarming locusts, who grow to enormous sizes.

The Giant Locusts possess the following powers and abilities:

The Giant Locusts are lured into the cold water of Lake Michigan (via an electronic mating call), which kills them as they are warm-weather creatures.