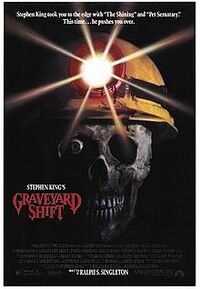 The Giant Mill Bat is the main antagonist of the 1990 American horror film Graveyard Shift.

When several workers attempt to clean out the rat-filled basement of a newly reopened textile mill, they find a labyrinth of tunnels inhabited by a gigantic bat.

The Giant Mill Bat is an enormous hairless bat the size of a man.

The Giant Mill Bat possesses the following powers and abilities:

The Giant Mill Bat is killed after it is pulled into and crushed by a large textile machine.