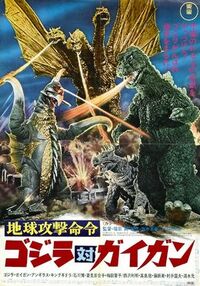 Gigan is the main antagonist of the 1972 Japanese kaiju film Godzilla vs. Gigan.

A cyborg created from a space dinosaur by the M Space Hunter Nebula Aliens, Gigan was sent to Earth to preempt their invasion of the planet.

Gigan is a large theropod dinosaur-shaped creature with green and yellow scales. Its hands have been replaced with scythe-like claws that begin below the elbow, and its legs end in a single silvery claw. There is a sharp buzzsaw-like apparatus running down its stomach. Gigan has a silvery beak with mandibles on either side, a single rectangular red eye, and a mohawk of sorts composed of three increasingly smaller horns. It also has three large sails on its back.

In Godzilla: Final Wars, Gigan is now black in color and has more human proportions. In its second battle with Godzilla in the film, its scythe-arms are replaced with large dual-chainsaws.

After being sufficiently injured, both Gigan and King Ghidorah flee into space.

In Final Wars, Gigan is decapitated by Godzilla's atomic breath, and his second form is killed after Mothra flies into him while on fire. 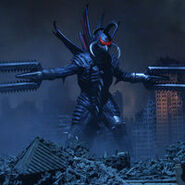 2004
Add a photo to this gallery
Retrieved from "https://movie-monster.fandom.com/wiki/Gigan?oldid=1557"
Community content is available under CC-BY-SA unless otherwise noted.