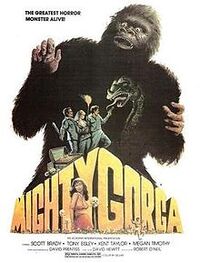 Gorga is a major antihero in the 1969 American kaiju film The Mighty Gorga.

A circus owner facing bankruptcy travels to Africa after hearing word of a giant gorilla living there, intent on capturing the beast to save his dying circus.

Gorga survives the events of the film, being left alone in his natural habitat.