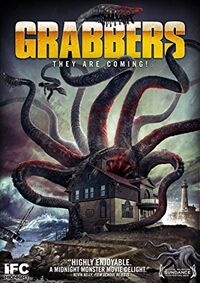 The Grabbers are the main antagonists of the 2012 British-Irish comedy-horror film Grabbers.

After arriving on Earth in a giant ball of green light, these tentacled aliens go on a rampage. Their only weaknesses are alcohol (meaning that being drunk effectively makes you immune to them) and dry areas (as they can only come onto land when it is raining).

The Grabber is blown up after a nearby pile of explosives is ignited with a flare gun. However, the end of the film shows that a hidden clutch of eggs is hatching.

Add a photo to this gallery
Retrieved from "https://movie-monster.fandom.com/wiki/Grabbers?oldid=776"
Community content is available under CC-BY-SA unless otherwise noted.