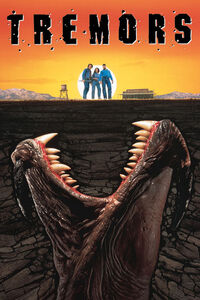 The Graboids are the main antagonists of the 1990 American comedy-horror film Tremors and its five sequels.

Prehistoric subterranean mollusks, four of these serpentine creatures emerged in 1990 near the small one-horse town of Perfection, Nevada, where they proceeded to kill several of the townspeople.

Graboids are large 30-foot limbless mollusks resembling giant tan earthworms. Their tough hides are lined with rows of spikes used to push themselves through loose soil. A Graboid's mouth consists of a large black beak with a wide upper jaw, a thin lower jaw, and a thin mandible on either side. Inside of a Graboid's mouth are three eel-like tongues with their own mouths and horn-like projections on each "jaw".

The African species of Graboid is much larger in size, with a darker brown color and numerous ridges of spines spiraling down the length of its body. It lacks the beak of its American counterpart, having a tooth-filled maw like that of a lamprey. Its tentacles are capable of detaching and slithering about autonomously.

One of the Graboids is killed by running into a concrete aqueduct wall, one is killed via extensive gunfire, one is blown up by feeding it homemade explosives, and one is tricked into tunneling out of a cliff-face, where it falls to its death.

Africa
Add a photo to this gallery
Retrieved from "https://movie-monster.fandom.com/wiki/Graboids?oldid=1337"
Community content is available under CC-BY-SA unless otherwise noted.