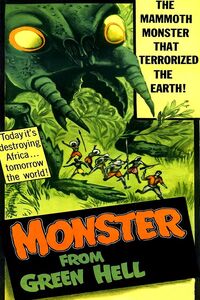 The Green Hell Wasps are the main antagonists of the 1957 American horror film Monster from Green Hell.

In an experiment to measure their growth in orbit, several wasps are mutated into gigantic killers by cosmic radiation. When they return, they go on a killing spree in the "Green Hell" area of Equatorial Africa.

The Green Hell Wasps possess the following powers and abilities:

The giant wasps are burnt alive when a volcano erupts, bathing them in burning lava.

Add a photo to this gallery
Retrieved from "https://movie-monster.fandom.com/wiki/Green_Hell_Wasps?oldid=2136"
Community content is available under CC-BY-SA unless otherwise noted.