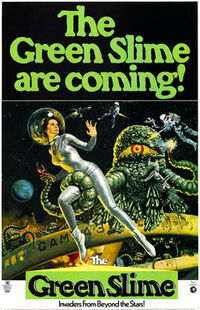 In an experiment to measure their growth in orbit, several wasps are mutated into gigantic killers by cosmic radiation. When they return, they go on a killing spree in the "Green Hell" area of Equatorial Africa.

The Green Slimes are tall blob-like creatures with bumpy brown skin. They have two tentacle-like arms, two thick scaly legs, a coating of a seaweed-like material covering their torsos, and a single thin red eye.

The Green Slimes possess the following powers and abilities:

The Green Slimess are killed after the astronauts detonate one of the nuclear devices on the ship after getting into an escape pod. 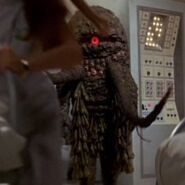 Add a photo to this gallery
Retrieved from "https://movie-monster.fandom.com/wiki/Green_Slimes?oldid=780"
Community content is available under CC-BY-SA unless otherwise noted.