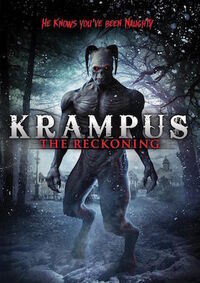 The Guardian Krampus is the main antagonist of the 2015 American horror film Krampus: The Reckoning.

A child psychologist is tasked with investigating the case of Zoe Weaver, an eight-year-old girl with the power to summon a demonic figure named Krampus to kill those who threaten her.

The Guardian Krampus is a tall, emaciated figure with gray skin and no hair. It has a skull-like face with empty eye sockets containing red pupils, two large horns, and a mouth filled with sharp teeth.

The Guardian Krampus possesses the following powers and abilities:

The creature survives to the end of the film.

Add a photo to this gallery
Retrieved from "https://movie-monster.fandom.com/wiki/Guardian_Krampus?oldid=2032"
Community content is available under CC-BY-SA unless otherwise noted.