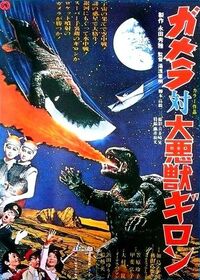 Guiron is a major antagonist in the 1969 Japanese kaiju film Gamera vs. Guiron.

When two brain-eating women from the planet Terra kidnap three children, Gamera sets off to rescue them and must contend with their guardian, a knife-headed creature named Guiron.

Guiron is a grayish-green quadrupedal creature with reptilian qualities. It has dark golden stripes on its back, large human-like eyes, a mouth full of sharp teeth, and an enormous knife-like blade on its head, the length of which is comparable to that of the rest of its body.

Guiron is killed after Gamera detonates a missile that had gotten stuck in his head.

Add a photo to this gallery
Retrieved from "https://movie-monster.fandom.com/wiki/Guiron?oldid=1742"
Community content is available under CC-BY-SA unless otherwise noted.