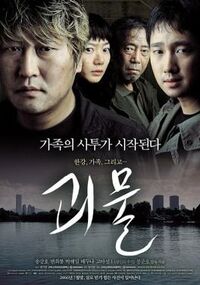 A fish-like creature mutated by formaldehyde pollution and host to a deadly virus emerged from the Han River one day and kidnapped young Hyun-seo, leading her distraught father Park Gang-du to track down the beast.

Gwoemul is a 35-40 foot green creature with wet scaly skin. It is shaped roughly like a tadpole with a long thin tail. Its jaw opens up in multiple parts and it has two clawed arms on which it can walk.

Gwoemul is killed after Gang-du impales it with a metal pole. 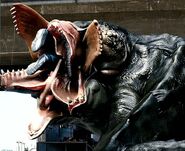