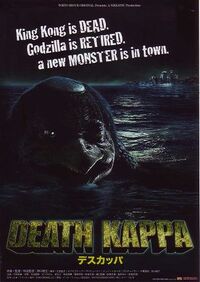 Hangyolas is the main antagonist of the 2010 Japanese kaiju film Death Kappa.

An accidental nuclear blast inadvertently creates an enormous fish-like monster that goes on a rampage through Japan before fighting Death Kappa.

Hangyolas is a fully erect dinosaur-like creature covered in blue fish-like scales. He has golden scales on his underbelly, as well as orange fins on his arms, the top of his head, and the back of his neck.

Death Kappa kills Hangyolas by pushing his stream of fire back into his mouth, causing Hangyolas to explode.

Add a photo to this gallery
Retrieved from "https://movie-monster.fandom.com/wiki/Hangyolas?oldid=2162"
Community content is available under CC-BY-SA unless otherwise noted.