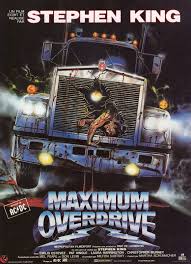 The Happy Toyz Truck is arguably the main antagonist of the 1986 American horror film Maximum Overdrive.

When a strange comet causes all of Earth's machines to gain sentience and become murderous, a group of survivors is holed up in a gas station by a gang of vehicles led by a toy-hauling semi-truck, who demands that the humans feed them gas in exchange for sparing their lives.

The Happy Toyz Truck is a large black Western Star 4800 18-wheeler semi-truck with the "Happy Toyz" company logo plastered across both sides. The cabin of the truck is black in color and possesses a giant recreation of the Green Goblin's head from the Spider-Man franchise.

The Happy Toyz Truck possesses the following powers and abilities:

The Happy Toyz Truck is destroyed after it is blown up with a rocket launcher.

Add a photo to this gallery
Retrieved from "https://movie-monster.fandom.com/wiki/Happy_Toyz_Truck?oldid=918"
Community content is available under CC-BY-SA unless otherwise noted.