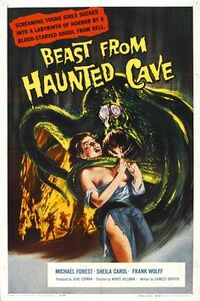 The Haunted Cave Beast is the main antagonist of the 1959 American horror film Beast from Haunted Cave.

The Beast from Haunted Cave was a member of an as-of-yet unidentified species of web-spinning predator living in a seaside cave where it kidnapped humans to drink their blood.

Not of the creature's body can be seen, but it is known that it possesses long hair, numerous tentacles or legs, and the ability to shoot webbing.

The Haunted Cave Beast possesses the following powers and abilities:

The monster is killed after being shot with a flare gun and set on fire.

Add a photo to this gallery
Retrieved from "https://movie-monster.fandom.com/wiki/Haunted_Cave_Beast?oldid=1375"
Community content is available under CC-BY-SA unless otherwise noted.