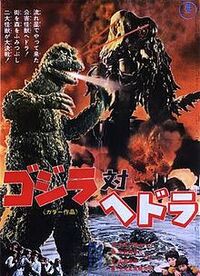 Hedorah is the main antagonist of the 1971 Japanese kaiju film Godzilla vs. Hedorah.

Hailing from the Dark Gaseous Nebula of the Orion, Hedorah was an extraterrestrial creature that fed on pollution and was capable of growing to immense sizes and changing form.

Hedorah is a tall vaguely humanoid creature composed of gray gelatinous slime. It has bulbous red eyes shaped like female genitalia, melty-looking hands and feet, and a long tail. In its Flying form, Hedorah resembles a typical flying saucer with its trademark eyes.

Hedorah is dried out by several giant electrodes and then torn to pieces by Godzilla. 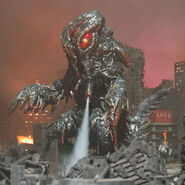 2004
Add a photo to this gallery
Retrieved from "https://movie-monster.fandom.com/wiki/Hedorah?oldid=1569"
Community content is available under CC-BY-SA unless otherwise noted.