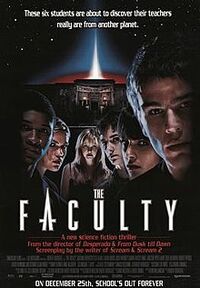 The Herrington Aliens are the main antagonists of the 1998 American horror film The Faculty.

When their own ocean-covered planet begins to die, a group of parasitic, aquatic aliens travels to Earth in order to conquer it and make it their new territory, their first stop being Herrington High School in Ohio.

The Herrington Aliens possess the following powers and abilities:

The queen of the aliens, Marybeth Louise Hutchinson, is killed after being stabbed by an ecstasy-inducing homemade drug, killing all of her offspring due to their hivemind connection to her.

Add a photo to this gallery
Retrieved from "https://movie-monster.fandom.com/wiki/Herrington_Aliens?oldid=1441"
Community content is available under CC-BY-SA unless otherwise noted.