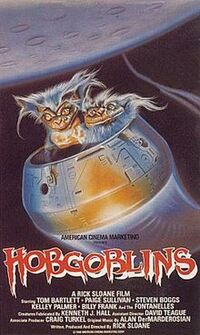 The Hobgoblins are the main antagonists of the 1988 American comedy-horror film Hobgoblins and its sequel.

When a night watchman at an abandoned film studio opens a large vault on the property, he accidentally releases a group of small furry tricksters who are capable of causing people to hallucinate their greatest fantasies before killing them.

The Hobgoblins possess the following powers and abilities:

The Hobgoblins are tricked into returning to the vault, which is then detonated with explosives.

Add a photo to this gallery
Retrieved from "https://movie-monster.fandom.com/wiki/Hobgoblins?oldid=1329"
Community content is available under CC-BY-SA unless otherwise noted.