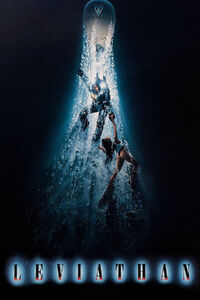 Homo aquaticus is the main antagonist of the 1989 Italian-American horror film Leviathan.

A strange aquatic creature created by a mutagenic chemical made by the Russians, Homo aquaticus attacked and tried to assimilate the crew members of an underwater mine supervision team.

Homo aquaticus is a semiaquatic creature that was created from mutated humans. Its appearance varies throughout the film due to its DNA absorption abilities, but its final appearance at the film's climax is a large black and tan "gillman"-like creature covered in scales. Its protruding lower jaw is armed with numerous teeth and the jaw itself has no floor, much like the deep-sea fish known as the stoplight loosejaw. On the creature's hunched back is a human head, and there is a human arm emerging from its side.

The creature is killed after an explosive charge is thrown into its mouth, blowing it up.

Add a photo to this gallery
Retrieved from "https://movie-monster.fandom.com/wiki/Homo_aquaticus?oldid=3645"
Community content is available under CC-BY-SA unless otherwise noted.